The Manly Local Studies Image Library is a perfect example of how a rich and attractive collection is stowed away behind an impoverished database query form. It’s also a good example to illustrate the fact, that it does not need to be this way. A (prototypical) interface offers a different view on the collection. 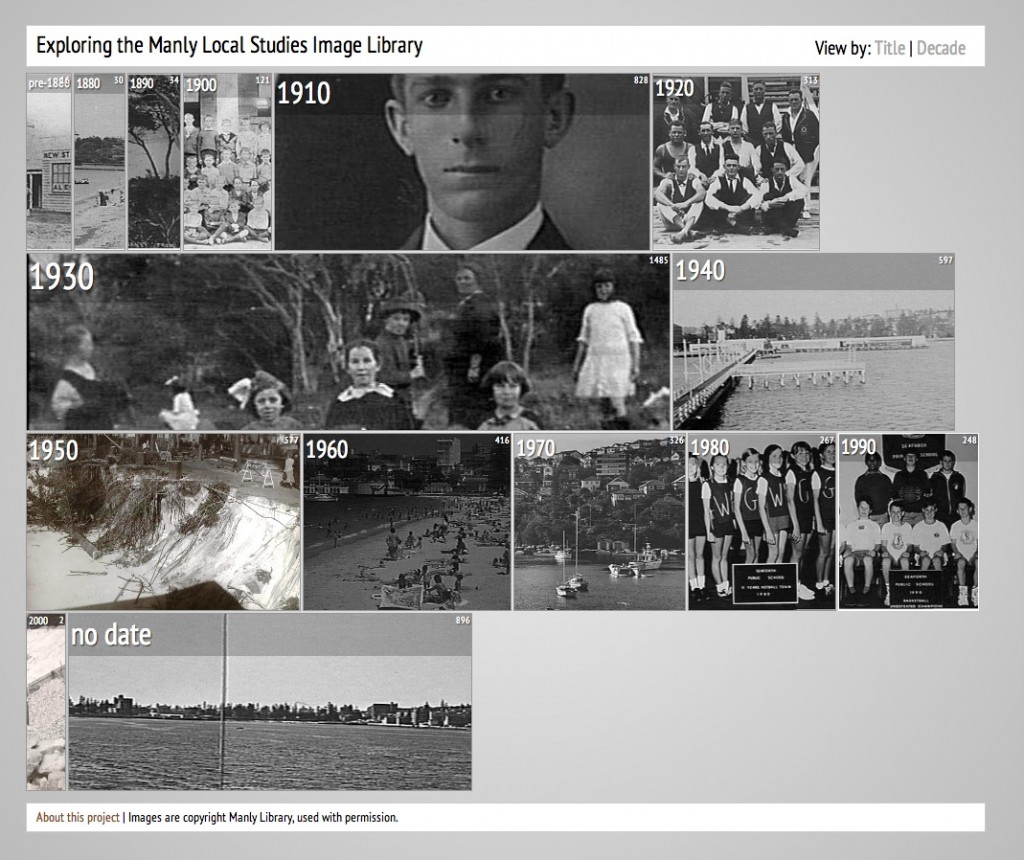 Manly Images is, after the Australian Dress Register already the second collection browser I’m presenting that origins from Down Under, and it won’t be the last. I have no clue, where the Australian interest in explorative interfaces comes from, but that is also not what this post is about.

When accessing Manly Images the user is presented with what is in essence a histogram of the collection’s content, although it doesn’t really look like one and doesn’t ask for any knowledge in statistics to be understood. Images are grouped by title or decade and stowed in boxes, that extend in width depending on the amount of images they contain (when viewed by title, the boxes also rescale in height). The arrangement of the boxes is like a flow of words, where wider boxes drop down to the next line if there is not enough horizontal space. Due to the fixed-width layout of the size, the arrangement is always the same as long as the collection doesn’t change. By hacking away the width constraints it is however possible to introduce a certain responsiveness and even arrange all boxes in one horizontal row.

Removing the width constraints on the Manly Images site allows the layout of the image boxes to adapt to the browser size.

One photograph per box serves as poster image and is exchanged continuously. Mitchell Whitelaw, the man behind the project, claims that it is actually possible to see the entire collection “without doing a thing”. How long every image is presented seems to vary — a glimpse at the source code reveals that every three seconds one poster image is changed, which means that in decade view it would take around 18 hours to see the entire collection.

At this pace most users will prefer to take action by clicking on one of the boxes, which causes another container to slide down below it. Inside, one finds horizontally aligned thumbnails of the images along with their title and year. Two buttons on either edge can be used to scroll through the images. Additionally, a timeline is displayed at the bottom of the container, with blocks representing years. The width of the blocks does not correspond to a duration, but to the amount of images shot in a certain year. Clicking on a year slides the corresponding images into view.

The navigation inside the boxes unfortunately lacks some of the elegance that the main interface does display. Navigating horizontally by clicking buttons might not be appropriate for current users, who are used to endless scrolling and swiping. Also, the animated transition of the images when clicking on a year in the timeline does not properly reflect a journey through time. Instead of scrolling to the selected time, the currently displayed images fade out and new ones slide in from the left or right side (depending if the new images are older or newer than the last viewed ones). Probably, this choice has been made in order to prevent the browser from struggling with moving through thousands of images. But in fact, their presence and motion could be simulated, by scrolling through just a few images.

It is also not possible to compare timelines across decades or subjects. Not only, because the scaling is different in every box — the timeline always occupies the entire horizontal space and the size of the individual years is dependent on the amount of images inside of it. Mainly, because it is not possible to have two boxes open at the same time, a flaw which is inherent in the layout.

To be fair, Manly Images is still in prototype state and has only just been released to the public as an experiment in, what Whitelaw calls, “generous interfaces”. The generosity even extends beyond it, in the sense that Whitelaw has made the entire source code available on github. So instead of bickering, I might as well get busy with it.

Whitelaw’s earlier work includes the commonsExplorer where his aim was to show everything in a collection. A similar approach was not possible with the Manly collection, as it is of a much larger size and browsers would simply not cope with displaying all the images.

In my opinion, the histogram type of view that might have emerged as a workaround, functions much better in giving both a quantitative and a qualitative view of the image collection, than displaying everything in a two-dimensional grid. I think, that a certain amount of (computational) curating of a collection supports active exploration and discovery and prevents a user from getting overwhelmed by the sheer amount of data.